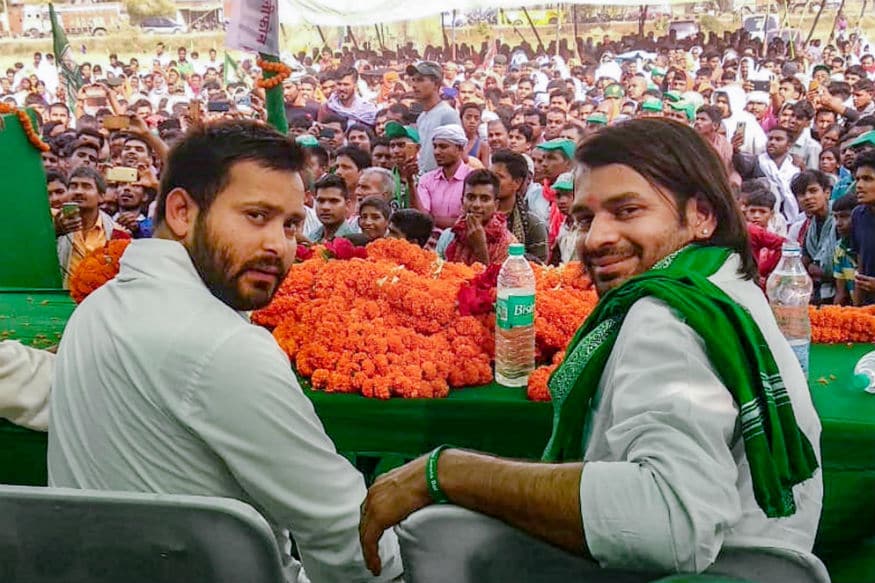 Yadav, who is the elder son of RJD supremo Lalu Prasad, put his foot in the mouth at the rally where he allegedly flayed the JD(U), which is headed by Kumar and BJP, to which Sushil Kumar Modi belongs, for the dramatic realignment of the two parties in July, 2017.

“I say that Nitish Kumar, whom my father had aptly named ‘palturam’ (turncoat), can also be called Nitish Kumari. And his companion Sushil Kumar Modi, the bearer of the saffron flag, should similarly be called Sushil Kumari Modi,” Tej Pratap said. “They cannot take us head on … they sit in their homes wearing bangles.”

The RJD rally was held at Masaurhi in rural Patna late on Wednesday night and video clips of it were beamed by local TV news channels.

Kumar had abruptly cut his ties with the Grand Alliance partners – the RJD and the Congress – and returned to the NDA.

Kumar had contested the 2015 assembly polls as the chief ministerial candidate of the Grand Alliance but took the drastic step after months of controversy that plagued his government over Yadav’s younger brother Tejashwi, who was then the deputy chief minister. Tejashwi’s name had cropped up in a money laundering case.

Tej Pratap, who was himself a member of the Grand Alliance cabinet, claimed that the JD(U) and BJP were scared of his father, who is now in Ranchi serving sentences in fodder scam cases.

The overnight drama that culminated in the realignment of the JD(U) and the BJP and the RJD being stripped of power was a fallout of that fear.

BJP spokesman Nikhil Anand came out with an angry statement in response, demanding an apology from the RJD leader. He reminded Tej Pratap of the allegations of domestic violence that his estranged wife has leveled against him.

“Was Tej Pratap trying to say that those whose names are suffixed with Kumari and who wear bangles deserve no respect? His tasteless remarks and the applause these received from his supporters are proof that misogyny runs deep in the RJD,” said Anand.

“His misogynistic remarks lend credence to the charges his wife has leveled against him. However, he must apologise to the CM and the deputy CM. If he is trying to emulate his uncouth father, he must beware — he may similarly land in jail one day,” added Anand.

Tej Pratap had tied the knot with Aishwarya Roy, daughter of RJD MLA Chandrika Roy, in May 2018 but filed a divorce petition six months later. Two months ago, his wife, who had chosen to stay back at the residence of her mother-in-law Rabri Devi in a bid to salvage her marriage, filed a police complaint accusing the mother and the son besides eldest sister-in-law Misa Bharti of domestic violence.

RJD national vice-president Raghuvansh Prasad Singh, a founding member of the party and an old associate of Prasad, also expressed his disapproval when asked about the young leader’s remark.

“This is not right. In politics, there must not be any place for derogatory remarks. People get carried away and end up with egg on their face, only to repent later,” said the former Union minister.

JD(U) spokesman Rajiv Ranjan Prasad said, “What can one say about a remark of such low level, in such poor taste, that it has left a veteran leader of the very same party embarrassed?”

Shaheen Bagh protest an example of struggle between rights and duties of people: Naqvi

Interview with Bryan Seiler: How To Approach Things Fom a User...

‘There’s No one to Question Nitish’s Governance’: After Fallout with CM,...

After Spoofing Kejriwal in Video, BJP Seeks Rs 500 Crore in...