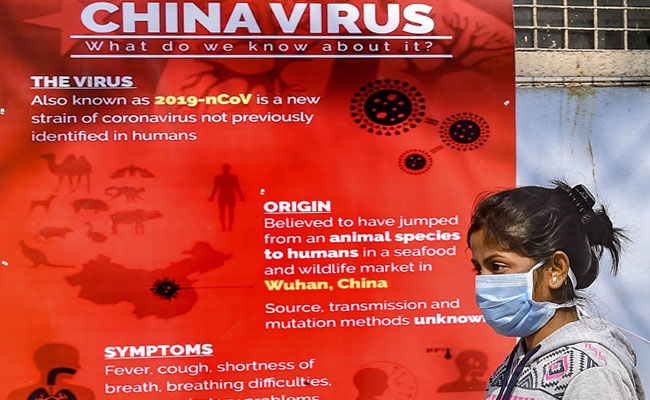 India’s ban on export of face masks and other medical goods has also affected China.

Kolkata has not reported a single case of the new coronavirus, which has killed 800 people and infected over 37,000 across the world, but is still feeling the pinch of the outbreak.

A two-hour flight away is the Chinese city of Kunming in the Yunan province. Scores of students go to colleges there and it is a busy base for trade across China. But all that activity has come to a standstill and Chinese citizens too are affected. Not only is India not giving visas any more, Chinese citizens who work in Chinese companies in Kolkata were not allowed to board a flight earlier this month though they had work permits.

Also delicate is India’s ban on export of face masks and other medical goods.

NDTV spoke to two fifth year students of Kunming Medical University. Md Ebrahim returned to Kolkata on January 18 for the Chinese New Year holidays break. Robina Singh returned on the 24th. By then Wuhan had been locked down.

At least 38 Wuhan residents who had returned to their native Kunming for the Spring Festival had been admitted to the hospital.

Now both have been told by the university not to return till a further update on February 17.

“I was supposed to go back on 29 Feb but the university said to wait till 17 Feb. After that they will give us further details. Of course I want to go back and complete my studies. But I am staying back now as parents are worried,” said Ebrahim.

The students are in frequent contact with university officials. Robina Singh said, “We talk to our coordinator our class teacher and administration staff directly. They are saying to wait till situation gets better. Till the campus reopens, stay back here.”

Her father said he would certainly send his daughter back to finish her studies and get her MBBS degree. “But only after the authorities give an all clear,” he added.

China’s consul general in Kolkata Mr Zha Liyou said all students who have stayed back at universities at Kunming and neighbouring Dali University are being taken care of.

“There are 29 Indian students at Kunming Medical University and 56 at Dali University. All alerted by university authorities on 21 Jan via WeChat (the most popular instant messaging app in China). They were given sanitizers, dorms are sanitized more frequently than before. And their body temperature monitored multiple times a day and all are well,” Mr Zha said.

Manoj Agarwal who imports agro chemicals from China for his pesticide factory at Barasat was to go to an agro chemicals and machinery fair at Shanghai from 22 Feb but has now cancelled his trip as the fair has been put off.

“It is the biggest agro trade fair in the world. From India 30,000 people were to go. More than 1,000 people were to put stalls over there. Everything shut. It was called off. They have not cancelled it but called it off indefinitely. When it will happen is a big question mark,” Mr Agarwal said.

So Mr Agarwal can’t go to China and China’s consul general in Kolkata says Chinese citizens are having trouble coming across despite having work permits. Last month, India decided to suspend visas to Chinese nationals. Later even paper visas were seized.

Net result: at least a dozen Chinese citizens who work for Chinese companies in Kolkata and had gone home for the New Year holidays are unable to return to Kolkata.

Sources say, some well-known Chinese business magnates who were to attend a wedding in the family of an Indian business leader were not allowed to come to India despite high-level efforts.

Mr Zha said, “Big Chinese companies, big names and they have resident business managers in Kolkata. But since they went home for Spring Festival, this is the time they are returning to their job in Kolkata. My office is taking calls about them whether they are able to board airlines back to Kolkata. As far as I know, a dozen of them could not get on board at Kunming.”

Another tricky issue is the export of medical equipment related to coronavirus from India to China. That’s been banned and has left many non-profit organizations in a lurch. They are unable to send material to China despite SOS for masks, goggles, body suits et al.

Joyeeta Mazumdar, who heads a non-profit called Indo China Promotion Council and has been working with counterparts in China in multiple fields, including education, said, “We have been asked by the foreign affairs in Nanning and some friends in south east China. We have been asked to send masks, medical suits, goggles, headgear, face masks. But on 31st we came to know it was banned for export. Nothing can go and they are in need in millions. They want one-two million of each of these products. China’s factories are closed. There is no manufacturing going on.”

A Kolkata importer of masks from China sent 60,000 unused stock to the consulate. But, sources say, the consignment was not allowed to leave Kolkata airport, even as check in baggage.

The bans are a grey area for people who communicate with China on a regular basis. “Friends in need are real friends and it feels bad that we can’t help them with medical equipment at such a difficult time for China,” the head of a non-profit said.

Despite a good year, fight for relevance continues

Why Did He Even Join Politics, Asks Congress After Sunny Deol...